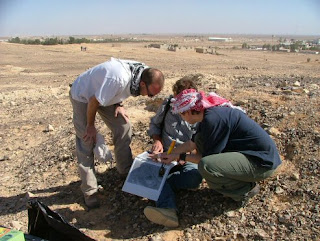 Today the party split into two groups with one exploring to find Batn Al-Ghoul station which was approximately 10 km north of Wadi Rutm station and the site of which was found with some difficulty. Almost all physical trace of the station had been erased from the landscape. Every stone of every building had been removed.

A short distance away from where the station would have stood was a probable Ottoman army camp represented by stone tent rings and on a nearby hilltop probable military breast work.

They then followed the old pilgrimage route south down into the wadi which cut across the abandoned railway embankment. They followed the embankment south and roughly midway between the site of bag and Wadi Rutm stations they came across a substantial military breastwork on a hilltop and nearby a group of probable stone tent rings. They then walked on to meet the main party who were excavating the Ottoman army Camp at Wadi Rutm.

This larger group spent the day continuing the excavation, metal detector survey and field walking which had begun the previous season. The detectorists undertook a full and systematic sweep of the entire plateau finding a number of Ottoman army uniform buttons, together with a range of other metal artefacts including spoons, coins, a lock and a pen nib. Four other teams excavated apparent tent rings at the western end of the encampment whilst the gun emplacement that had been uncovered last year was methodically recorded. Evidence of tent pegs both wooden and metal and centralised post holes indicating tent poles and the use of Turkish bell tents was found.

At the end of the day a suspected stone circled cess pit was investigated. This turned out not to contain cess but rather revealed evidence of burnt material which will be further excavated tomorrow.