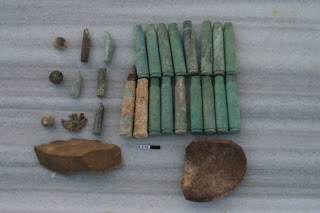 Today we returned to the area in front of the station at Ma’an. The trench area to the north of the Hill of the Birds which had proved so productive on the first day was re-visited by the detectorists who performed 30 metre gridded timed sweeps for a distance of 330 metres along the trench system, towards the redoubt. This yielded over a kilogram of incoming rounds, small shrapnel, and grapnel balls and fired cartridge cases. It is hoped to be able to complete this survey tomorrow morning with a view to marrying up the results with the previous season’s data that covered the rest of the trenched area.

Elsewhere the digging teams completed the recording of the other main features of the site, mainly planning, photographing and section drawing, to contribute towards a comprehensive data set covering the entire militarised area. Whilst doing this the archaeologists discovered a piece of unexploded ordnance in the Southern redoubt. Fortunately the corrosive nature of the sand in which it had lay for some 90 years had reduced it to what was described as ‘a lump of blue Daz’ rendering it completely harmless but of great interest!

Landscape archaeology research using Google Earth had previously identified trench systems on Jebel Semnah, about six kilometres west of the Hill of the Birds and Ma’an station. These were visited and surveyed by a small team today. We have now proved the existence of an outer ring of defences around Ma’an and the Hijaz railway station. Jebel Semnah completely dominates the surrounding landscape and is a forbidding eminence for any potential attacker, its gentle slightly convex slopes, devoid of any cover or dead ground, would have constituted a desperate killing ground in front of the Turkish trenches. The surface was littered with fired rounds, evidence almost certainly of the battle fought here in April 1918.

Finally as promised – here is a link to some pictures showing what we have got up to during the first week of our second season here in Jordan: http://www.gwag.co.uk/Images/album/index.html

Absolutely AMAZING images - thank you SO much for posting them for those of us who can never see them in real life. I am riveted to your explorations and hope you continue...