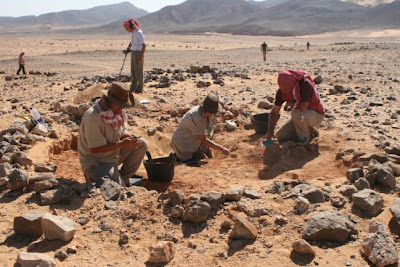 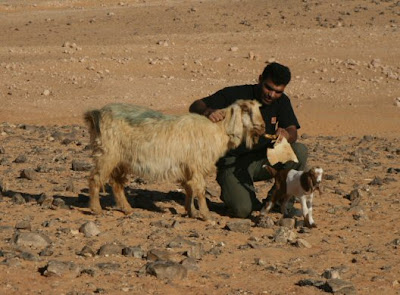 Work began at pace today in an attempt to complete the excavation and recording of the Ottoman army camp at Wadi Rutm. With several tent circles as yet untouched it was a big ask! All teams worked really hard throughout the day but in the end it proved to be too big a task to complete, so we will be going back tomorrow morning to absolutely finish off this site. There was one excellent outcome from today. At the end of last season it was unclear where both the cooking for the camp was done and where the latrines were in the camp. Having found the cooking pit a few days ago the quest for the latrine remained. This was eventually positively identified and excavated this afternoon, leaving two of the significant unanswered questions from last season now well and truly answered.

Also during the morning a small group went to a site near to Wadi Rutm station where the Bedouin had camped overnight with flocks of goats and sheep and a large herd of camels. This was an overnight stop on their migration path south for the winter and the location was one which has been used for thousands of years for travellers in both directions. The intention was to experience firsthand the nature and presence of such a troop of travelling nomads, and to hopefully begin to understand it within the context of the overall historical and ethnographic landscape. Evidence of a fire, tea making, animal feeding and children playing were all found and photographed, together with modern day cartons for milk, eggs and mango juice. This together with other information found and recorded will hopefully form the basis of some further research and publication.

Another bizarre intrusion into our conflict zone occurred today, although this was hardly an act of aggression. A female goat kidded somewhere near the centre of the camp while we were all having lunch some 100 metres away by our bus. On returning to the site the newborn kid was partially collapsed between one of our flight cases and our water bottle supplies, with the mother anxiously waiting nearby. After some gentle coaxing and moving of kit, and some carefully offered water by our local driver Salah to the mother, the two were reunited and the young kid immediately suckled. A few minutes later both were content and calm and were driven off by Salah in an attempt to find their owner. A short way down the road he came across a Bedouin anxiously searching for his lost goat. How surprised and grateful was he to not only have her returned but with a healthy kid as well! And it turned out to be the very same Bedouin who had entertained a couple of our group to Chi (Jordanian tea) in their camp the day before, so the favour was very well returned with smiling faces all round.

Tomorrow brings a last visit to Wadi Rutm and a first proper look for the team at the new site at Fassu’ah, with a blog report hopefully late afternoon/early evening.