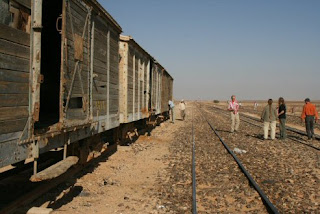 On the way to the dig site at Wadi Rutm the party stopped to take a brief look at three extremely interesting coupled 1913 dated German manufactured rail wagons on the old-line between Ma'an and Wadi Rutm. Showing the signs of age and wear and tear from their fierce desert environment, they are desperately in need of conservation and we hope we can be able to find some way to encourage and support this.

Following on to Wadi Rutm the party as usual split into various teams. The detectorists went on to a site near to South of the station itself where a known spread of ancient and modern coinage and artefacts had been found the previous season. After a shaky start and in intense heat with no option of shade they worked on for 3 hours, locating 12 coins ranging from medieval to 1955. This site would definitely benefit from a return, albeit preferably in more hospitable climes.

In the afternoon two detectorists revisited each of the tent ring features at the site to re-sweep and code any new finds. One went off with three others to two sites to the west of Rutm station that had been found in the walk yesterday. These consisted of approximately 8 tent rings and a suspected outpost. Only one fragment of a fired bullet was located.

Elsewhere the western end of the tent rings and gun emplacement recording (both drawn and written) continued. Tent ring 4, the most extensively and professionally constructed, (i.e. it has the largest placed ashlar!) produced unexpected small finds. These included a piece of Turkish WW1 barbed wire, a desiccated date stone, (you can imagine the Ottoman soldier chewing and spitting whilst keeping guard over the Wadi), and even fragile paper.

Once the recording was complete the excavation team moved west – to begin the next challenge: further tent rings, not all circular (more info to follow tomorrow), small gun emplacements and features as yet undetermined. And, the non-cesspit is now definitely a cooking pit and square into the bargain. Burnt seed/corn husks are just some of the finds surfacing.

Today’s heat also made us feel like trapped Ottoman soldiers awaiting the Arab anvil. Other groups forayed out to seek further exciting locations and to confirm the worthiness of some already found. Reports back from these were unfortunately too late to make today’s blog, but will hopefully be included tomorrow.

Over the past few days we have had a number of visitors including local village children and adults, police of various sorts and a party of four Brits who found out about us via the GARP website and in spite of a very outdated map managed to find us in the desert. They were very interested in the project and came to have a look at both to Ma’an and Wadi Rutm, with a view to potentially bringing a larger party back next year to visit the fascinating site of this First World War conflict.