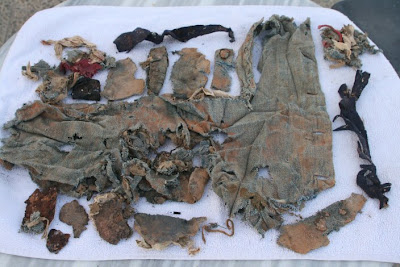 Today the detectorists were dropped off at Ma’an and completed the gridded survey to the rear of the trench faces the second phase of which had begun yesterday. Yields were as expected with a significant clustering towards the redoubt and tapering away as the trench dwindled towards the town. The usual metallic objects were all found, incoming rounds from the attacking forces including French and British bullets, many grapnel balls and some heavier shell fragments. The defending Ottomans were found to have been firing their usual German Mauser weapons with plenty of cartridge cases in evidence.

This group then joined the main party at Wadi Rutm just in time for morning tea. The others had been completing the recording of the tended encampment. More tent rings had been excavated and the detailed recording had begun. This carried on throughout the day, reflecting the need and importance for the place of painstaking and thorough work in amongst all the excitement of new discoveries. In all three teams are furiously recording and two slogging through sand to uncover more of the Ottoman Encampment, and all in 30 degrees C in the shade, (although there isn’t any....) We are now more like silicon monkeys than dirt monkeys! Also of note is that one of the previously excavated rings had been tampered with since our last visit, with the central post hole enlarged and the central stone moved, probably by treasure seekers in a vain attempt to find gold, just as if to confirm the true conflict nature of this incredible landscape.

During the afternoon a team including the detectorists travelled in the 4x4 across country from the main road at Batn Al-Ghoul and up the escarpment from the base of Batn Al-Ghoul to the site we are currently calling Fassu’ah 2. An initial metal detector survey revealed evidence for Ottoman occupation and outgoing fire, together with some more horse shoes. In the courtyard of the main building complex a system of delicate paths radiate out from a central point which may have originally been a flag pole. Examination of the Fassu’ah 2 site has emphasized a growing impression that Ottoman defensive tactics during the First World War were sophisticated and likely to have been effective. The stereotype of a corrupt and incompetent army seems increasingly less likely on the evidence of modern conflict archaeology.

I think the blog for the GARP Project is an excellent step forward; both the subject and the area under study are clarified by its presence. This of particular value bearing in mind the originality of the project and the probable lack of experience, for most people, of the landscape in which it is taking place. Further accompanying images are eagerly awaited!