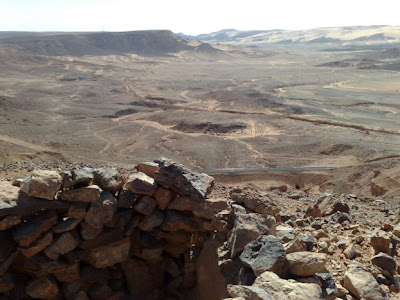 Excavation and recording of the Ottoman army camp at Wadi Rutm continued and included the probable discovery of the military latrine for the camp. Meantime Bedouin nomads were moving down the Wadi migrating south to winter in the Hijaz. Early warning of this event is given when two archaeologists appear over the crest of the hill fleeing in panic from a pack of dogs. The dogs, having gained the western end of the hill, marked their victory by urinating on the excavations, proving this yet again to be a contested landscape. The dogs were i fact shepherding a huge flock of sheep and goats, most of whose Bedouin owners arrived in a lorry, a tanker and a pick-up truck to set up camp about 250 metres from the traditional caravan site by Wadi Rutm station. The oldest coins from this site we now know to be Nabatean, so that the arrival of the bed today proves at least 2000 years of use of this traditional place of gathering, camping and trading. In the afternoon they were all joined by a similarly impressive herd of camels.

Meanwhile at Fassu’ah 2 the geophysicists gridded the outer defended area within the walled enclosure into 30 metre squares. The magnetic survey of this area revealed several interesting anomalies which are worthy of future investigation. The metal detectors then followed them into the grids detecting and logging a range of initial finds for the site.

The rest of the team that had not visited Fassu’ah 2 before went up to the site in the afternoon to be universally struck by the quantity of historical and archaeological material and the awesome wonder of the place itself in its commanding position overlooking the wadi.

An initial investigation of the surrounding landscape revealed a system of stone lined roads, paths leading to a group of 4 stone quarries. These paths converged at a bend of the Hijaz railway just north of Batn Al-Ghoul station and were joined by another stone lined path which had exited the main administrative block within the main compound. This evidence suggests the possibility that a deliberate halt for trains was established at this point for the purpose of loading stones and access for officers, water and supplies to and from the train. If this is right then it’s likely to have been a response to the conflict pertaining at the time rather than an integral part of the pre-war railway system.

Hi guys I have been following your blogs every day and have found them fascinating and I really appreciate you posting them. The Ottoman uniform is a fantastic find. I'm the guy who gave John a copy of the photograph of the artillery positions at Ma'an.

Keep up the good work and look forward to more entries.

All the best
Dominic