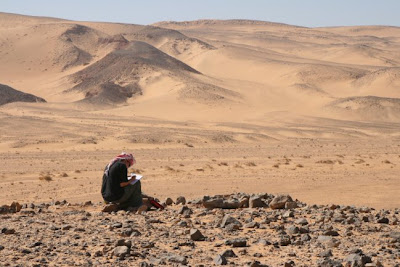 What an amazing day! On the Eastern escarpment above Wadi Rutm station, we have now identified a complete military complex which includes a large dry stone wall built redoubt, several smaller outposts and five trenches. Much of this came about by following some painstaking research into a document consisting of a sketch by a First World War pilot of some trenches on the hillside above the station.

Also work continued excavating and recording the Ottoman Army camp North of the Wadi Rutm station. This is what archaeology is really all about. Today we excavated an Ottoman army position amidst the stunning scenery of Wadi Rutm, and it turned out to be a possible pre-historic megalithic structure! Four to six thousand years of Near Eastern heritage, encapsulated in a single landscape – this is why we are dirt monkeys!

Elsewhere, at Batn AL-Ghoul old station one team began a geophysical survey in the area of the disappeared station buildings. Nearby metal detecting began in an area of apparently Ottoman military tent rings which were discovered yesterday on a walk along the railway line between there and Wadi Rutm. This unearthed many Turkish army buttons one of which was attached to the cuff of a uniform. Further digging unearthed most spectacularly large fragments of an Ottoman army uniform which contained in a pocket a wad of desiccated printed paper which could be anything from money to cigarette making paraphernalia.

Meanwhile a small team investigated an intriguing scatter of thousands of corroded and often flattened tins believed to have originally contained meat, fish and possibly soup. This represents a side investigation into objects that were not First World War but which are found superimposed on ww1 sites elsewhere. They almost certainly belong to a period somewhere between the 1960’s and 70’s and thus represent a unique case study in ‘contemporary archaeology’. By investigating these objects, we will better understand their presence and significance on ww1 sites.

It gets better! A chance encounter with a Bedouin man and a trek into the hillside above Batn Al Ghoul lead to the discovery of an impressively large Ottoman walled complex, previously unknown to us, with the remains of large stone built dry stone wall structures. Just outside the walled enclosure is a large and almost complete oven structure. This site totally dominates the Wadi Rutm ad would appear to be a kind of command post for the Turkish military presence in the whole area. The oral tradition appears to suggest that this was indeed occupied by the Ottoman commanders. Part of the area was said by the Bedouin to be stabling for officers horses, and indeed a horse shoe was found in that area.

As days pass we are only just beginning to come to grasp with the extent and wonder of this fascinatingly rich militarised landscape.