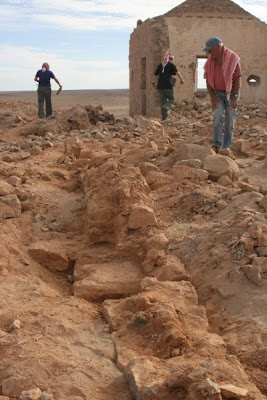 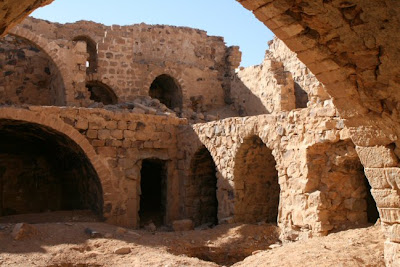 We surveyed the early Ottoman fort which we know as Fassu’ah 1 and which was a water source for the Hijaz Railway during the First World War. Because the fort is in a vulnerable position in a wadi dominated by high ground, unsurprisingly we found that the surrounding heights were defended with breastworks and trenches. Our survey also included the two cisterns beside the fort, from which we believe trains of pack animals carrying water skins transported water to Aqabat Hijaz station about 2 km to the east. The survey team also found traces of the Anglo-Jordanian army exercises that had taken place over the previous few weeks. We sampled abandoned ration tins, and found, much to our delight, that British Army issue chicken and herb paté is quite palatable!

At Aqabat Hijaz Station, a second team cleared debris and surveyed and planned the site. This revealed that the station had been converted into a mini fort with the addition of loopholes, mud brick walls, and extensive breastworks with blockhouses. A collection of elaborate Ottoman roof tiles was made for later study. Other finds included cartridges, buttons, fragments of uniform, and several Turkish grenades. Unfortunately, this complex site, while rich in finds, is being destroyed by mechanised earthmoving probably motivated by the pervasive myth of buried Ottoman gold.

Later in the day, to round off the season, the two academic directors of the project gave a Powerpoint presentation at the Ma’an campus of Al Hussein Bin Talal University to an audience of about 200 students. Discussion was lively, and the success of the event was evident when a number of both male and female students expressed an interest in volunteering for the 2008 field season.

This year’s field season has proved as successful as last year’s with many new discoveries and insights. We are discovering spectacular sites in the desert faster than we can investigate them. Many are completely unknown, unexplored and unrecorded. We plan to investigate several of these new sites next year. In particular we plan to study the fort and possible command centre on the Batn al Ghoul escarpment, and to excavate the nearby Ottoman Army camp from which we recovered parts of a military tunic and where there are other indications of superb preservation of First World War artefacts.

We will be returning to southern Jordan for our 3rd Field Season in November 2008. Essential details will be confirmed within the next few weeks. Recruitment will then begin immediately. Log on to this site again soon. Book early to secure a place.

I always inspired by you, your views and way of thinking, again, thanks for this nice post.