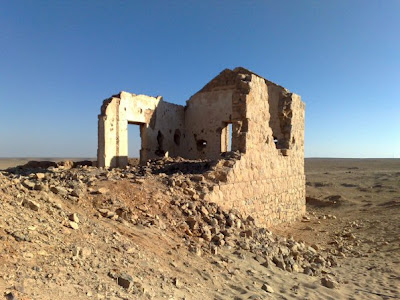 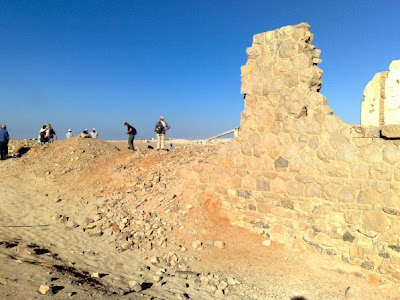 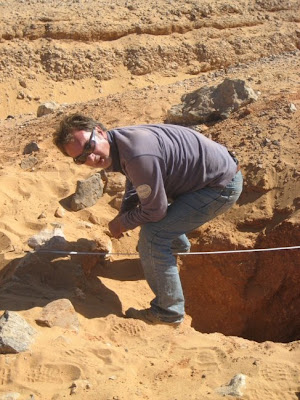 Work continued on the camp in an attempt to finish off the entire site this morning. All hands were involved in planning the remaining tent circles and similar features or continuing to excavate the now rapidly expanding latrine. The site planning was completed by around mid-day and whlst the drivers were at their Friday mosque services an impromptu metal detecting demonstration was given to those waiting for them to return with the transport. Several folk had what for them was a first go at detecting and everybody found something, ranging from an old nail to a Turkish button, so it was a great success.

The latrine pit (yes we’ve had every joke about bottoming your feature and feeling a breeze in the Wadi) turned into another potential megalithic structure, with the Ottoman brick latrie structure cut into it millennia later. More recording in the heat and the flies and we finally finished the work at Wadi Rutm. Oh, and we got to use the phrase ‘faecal staining’ in the report.

In the afternoon the team transferred to a new site, Aqabat Hejaz railway station, which is two stations north of Wadi Rutm, about 10 km up the line. This station seems to have been turned into a small fort with loopholes in the walls and both mud brick and the addition of dry stone wall breast works. The site is largely ruinous and at risk from modern industrial activity from the modern railway and nearby phosphate works. Creating a plan of this station-fort is therefore a form of rescue archaeology. Finds within the area of the buildings included a live 303 round, a book, elaborate Ottoman roof tiles and other artefacts. Around the exterior of the buildings

The day ended with a dramatic illustration of how different and exciting conflict archaeology can be. Attempting to visit the site of an early Ottoman fort which we call Fassu’ah 1, team members found themselves almost in the midst of a joint Jordanian British army exercise, with smoke shells bursting, machine guns rattling and soldiers crouching, running and firing whilst the start shells burst overhead. And all this occurred on and around the site of the Ottoman fort1. The team members discussed with a member of the British armed forces the possibility of visiting the site on Sunday 11th, Remembrance Sunday. This would be a dramatic and fitting conclusion to our two week expedition and study of modern conflict archaeology.

Tomorrow is a rest day and most of the group are going down south to see the stunning Wadi Rum and spend some time in the resort of Aquaba.