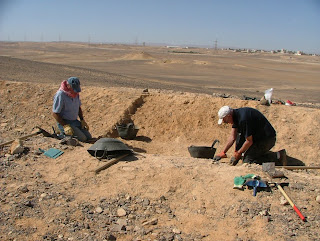 Ma’an station, a major station on the HIJAZ RAILWAY, is at the centre of a complex of hilltop trenches extending outwards from the station designed to protect it and a garrison of up to 6000 Turkish troops in 1916 – 1918. The whole party went to the site for the first time today. The various teams went off to develop their work in the following areas: the metal detectorists spent the morning investigating a section of the crenulated trench to the north of the Hill of the Birds and discovered one particularly heavy concentration of expended cartridge cases and incoming rounds possibly indicating the location of a single firing site during the battle. The surveyors roved across the wide expanse of the lower levels of the site and located the foundations a number of new buildings and other feature. These were further investigated in the afternoon by the detectorists. One digging team excavated a section of front line firing trench and communication trench serving it. A second digging team excavated what was probably a hastily constructed support trench for the front line firing trench at a slightly higher level. Unlike in the front line the frontline firing trench, no expended munitions were found in the support trench, which implies it postdates the battle in April 1918. Two other digging teams working on the southern redoubt, one excavated a short section of frontline firing trench and its’ serving communications trench, and the other excavated a possible machine gun placement.

We were also visited by the Inspector of Antiquities for Ma’an Hani Falahat, who took one of the directors to se be Birket Ma’an, where there is a gigantic Ottoman cistern fed by a spring which supplied water to the whole of Ma’an including Ma’nn station and the Turkish garrison during the first world war. This enlarges the defended landscape of which we are aware and are attempting to define.

The plan is that tomorrow the team heads out into the desert proper to Wadi Rutm, to continue investigation of a Hijaz Railway station and Turkish military encampments. We also hope to publish edited extracts of the Site Diary beginning tomorrow.

We are most grateful to the Candles Hotel Petra for their kind assistance with access to Internet facilities for the uploading of this blog.